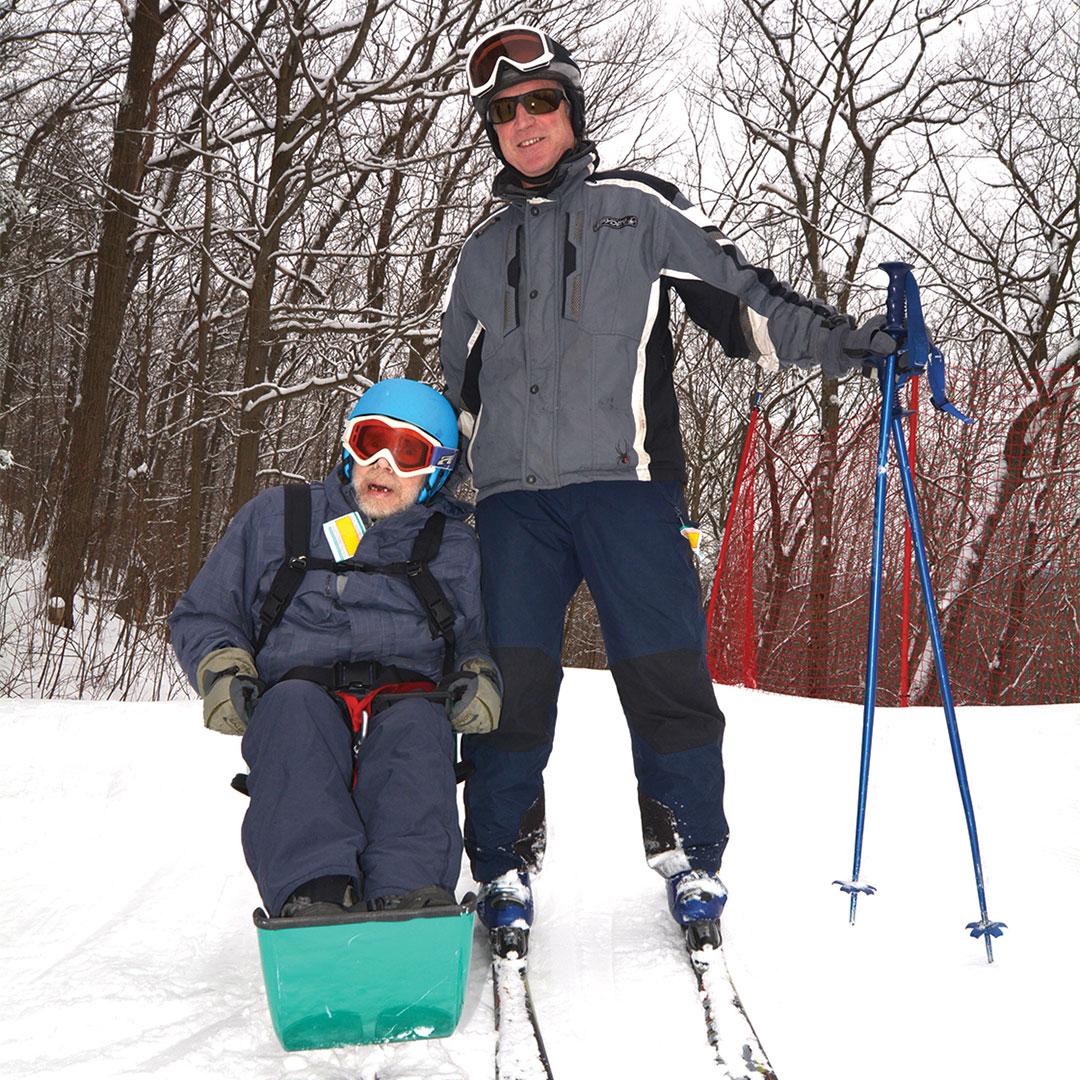 So, I would like to take this opportunity to reflect about a recent day in the life of my brother, George, who is a resident at Westgate Lodge. George has been there for a couple of years, and I recall one day early on in his stay (when he was able to ambulate with a walker), a conversation with Teri, who helps look after residents, involving George and myself. Teri was explaining that she was a ski patroller at a local ski hill (Batawa), and George and I explained that he was once a very avid skier and also a ski patroller. It was kind and thoughtful on Teri’s part to engage my brother in this manner, and put a smile on his face.

What happened a couple of years later is so remarkable that I felt compelled to write this.

You see, one day this past winter Teri explained to me that she was looking for my permission for George to go skiing...by now, he had fractured his hip in a fall, and his infirmity has precluded him from having surgery to fix it, so he is pretty well confined to a wheelchair. I laughed (out loud, and inside as well) thinking that she was kidding. She then explained about a program called Track 2 whereby my brother would be placed in a type of sled, on skis, and guided down the slopes by trained ski patrollers.

The day finally came, and it was spectacular for George, myself, and his entourage of friends who got to witness it. I skied along with him, as well as a cadre of ski patrollers, including Teri, for many runs. He wanted to keep going!!

Alas, it was time to stop, and into the chalet at the bottom of the hill we went, to join our friends for an apres ski sociable beverage. I have not seen George so happy in years. He even had a glass of wine (something he has not had interest in for years) in a ceremony of celebration of a great day. It still brings tears to my eyes. I am so grateful to Teri and those ski patrollers for their efforts, making this magical day possible. Who would have thought (except for Teri and her crew) that this could have happened.

While caring for George one day we shared stories about our love of skiing. George mentioned to me that he skied all over the world and told me that he was a ski patroller for many years. I shared with George that I was a member of the Canadian Ski Patrol and we had many talks about our experiences skiing. I knew I had to try to get George on the hills one more time.

I contacted our local Ontario Track 3 program. Track 3 is an organization that gives disabled athletes the opportunity to ski again. This program runs out of Batawa Ski Hill. I spoke to the staff at the hill and they were eager to make this happen.

After weeks of planning the day finally arrived. George and Jamie arrived shortly after lunch, we did a brief rundown of what George would experience and the safety protocols of being in the sit ski.

Our first trip up the chairlift was pretty adventurous. Everything was safe but the look in George’s eyes was like OH NO! The first run that we did was a blue run, we wanted to take it easy, not knowing how he would handle it. Well let’s just say his eyes and smile said it all. We continued to ski for two hours.

Our last run down I had my fellow Canadian Ski Patrol members give George a salute run down the hill. It’s an honorary run with the ski patrol flag leading us down the hill.

It was amazing to see two brothers out on the ski hill together enjoying a day one more time, with George so full of life and Jamie so happy that he was able to be there with him.

This is likely one of the greatest joys that I have ever been part of – being able to give George the gift of the opportunity and the experience to be out on the hill with his brother. I am so thankful that we were able to make this happen and I will cherish it forever!
Teri Fleming – PSW Westgate Lodge

(I was) excited and hoped it would happen. It felt fantastic! Superb! I appreciate the efforts of Teri and Jamie. I had a great time and hope we can do it again!
George Mason – Resident Westgate Lodge